Soul Underground: before the beginning

The roots of Soul Underground go back to September 1982, and a freezing, warehouse-like space in Manchester. It’s three-quarters empty, the sound system is terrible, but the music – the music is something else.

The DJ – local hero Hewan Clarke – is switching between funk, electro, hip hop and obscure New York underground disco. Peech Boys moves into D-Train, into ESG’s Moody, ACR’s ‘Shack Up’, into Cabaret Voltaire’s Yashar, into the otherworldly Planet Rock. To me, this is music from another world. More than that, it’s music genres clashing, feeding off each other and creating something new.

Forward to mid-1987. I’m working as a freelance photographer and living a double life. There are the rent-paying jobs, snapping businessmen for hipsters’ bible Accountancy Age. And then there’s the work I love, capturing the emerging London hip hop scene – graffiti artists, breakdancers, DJs and rappers. I’ll be photographing the graffiti around Ladbroke Grove in the morning, then spending an afternoon trying to get an interesting shot of a bedroom mixer cutting his Ultimate Breaks & Beats LPs.

By now, hip hop has evolved since the early days of electro and “hotel, motel” rapping: it’s three years since Run-DMC’s stark, brilliant debut LP, and two since LL Cool J’s minimalist B-Boy classic I Need A Beat. And, of course, there’s Public Enemy’s Yo! Bum Rush The Show – one of the scariest and most exciting records I’ve ever heard.

And now, rap music is looking to soul, funk, even jazz for inspiration – fuelled by, and fuelling, the growing rare groove scene. Inspired by these obscure break beats, a whole new generation is discovering ’70s funk and soul through club nights like Norman Jay’s Good Times, the Soul II Soul nights at The Africa Centre and Simon Goffe’s Across The Tracks.

At the same time, Jay Strongman has brought his eclectic taste and warehouse vibe to the West End, playing anything from electro to heavy funk and rockabilly to a black and white crowd at The Mud. Fashion victims and soul boys mix happily with West London breakdancers. It’s a musical and cultural fusion you’d be hard-pushed to find today.

And then there’s the music that dare not speak its name – that disco-but-not-disco you’ll hear in obscure clubs, and pirate radio. House music – ignored, derided and hated by so many of the people who a few years from now will claim to have always been into it – is truly underground, fantastically experimental and still figuring out its possibilities. In a mirror of rap bringing black and white kids onto the dancefloor, house is building bridges between the straight and gay scenes.

Rock music has always been good at talking about itself. Leading the field at that time was the grown-up music press, headed by NME, but far more interesting to me were the fanzines: the onset of punk and the DIY philosophy of the ‘alternative’ scene in general had seen an explosion in passionate, fan-created magazines. No matter that many were incredibly narrow in focus, willfully obscure, really badly written and usually lasted only two issues… the best had a passion and freshness missing from the ‘serious’ rock press. And it was this attitude – a passion and feel for the music – that was missing from most writing about black music.

It seemed weird to me that the only place to read anything halfway intelligent and on-the-ball about the music I loved was in the new style magazines i-D and the Face, or hidden in the back pages of the rock press. The established black music magazines seemed stuck in another era, obsessing about old soul guys and dull reggae. Rap was largely derided (The likes of Ian McCann and Stuart Cosgrove managed to sneak some great material through, but they were the exception), while the incredible growth and mutation of dance music was all but ignored.

It’s obvious that we’re on the edge of an incredible new era for music, one of those rare periods of flux that somebody – anybody – ought to be documenting…

This site uses Akismet to reduce spam. Learn how your comment data is processed. 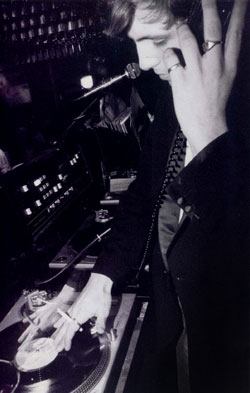 Another huge influence came from Greg Wilson. I first met Greg at his electro-funk night at Manchester’s Legend club – which, for a long while, blew The Hacienda out of the water when it came to music. Greg had roots in the funk and soul scene, but mixed it up with electro, hip-hop and a bewildering variety of black music.